Take a Bird's Eye View of Cape May with this Unique Perspective Take a flight over Congress Hall in Cape May and view the Beaches from a Seagulls view with this unique aerial drone footage from above.

Congress Hall is a historic hotel in Cape May, Cape May County, New Jersey, United States, occupying a city block bordered on the south by Beach Avenue and on the east by Washington Street Mall. It is a

contributing building in the Cape May National Historic District.[1] Congress Hall was first constructed in 1816 as a wooden boarding house for guests to the new seaside resort of Cape May; and the proprietor, Thomas H. Hughes, called it "The Big House." Locals, thinking it too big to be successful, called it "Tommy's Folly."[2] In 1828, when Hughes was elected to the House of Representatives, he changed the name of the hotel to Congress Hall. It burned to the ground in Cape May's Great Fire of 1878, but within a year, its owners had rebuilt the hotel in brick Cap May NJ Press Release

Save up to 10% for all Water Sport Events by booking on Cape May Resort.com Simple Tix here, use Cape May Coupon Code CAPEMAYRESORT

You can save on the following events in Cape May during you next vacation or weekend stay. It’ s simple and easy, search the Cape May Resort events below, select the best time the matches your vacation schedule and order your tickets on line while using promo code CAPEMAYRESORT. The savings is automatically deducted from your local Cape May Event.


Get the best prices with the Cape May Coupon Cape May Resort and book your favorite deal below during your vacation stay in Cape May NJ.

Dolphin Watch Around Cape May 10 AM Loved by adults, family’s, children, and seniors, our morning trip remains the most popular group option. The timing leaves the day free for further exploration of the Cape. See the Dolphins in the perfect morning light . Big Trip “Whales and Dolphins” 1:00PM Depart the Miss Chris Marina on a voyage into the unknown- at least for you. Captain Jeff and his seasoned crew will take you into the Delaware Bay, and the Atlantic Ocean. The Delaware Bay Estuary is a sanctuary for many species of Marine Life Dolphin Watch Sunset Cruise 6:30 PM Enjoy the sights and sounds “Around Cape Island” as you take in the beauty of Cape May at Sunset while dolphins play near the boat. It is the perfect end to a vacation day for couples and families. This trip includes free pizza, hot dogs and fun. Cape May Whale Watcher Grand Lighthouse Cruise 10:00 AM See the Lighthouses of the Delaware Bay while we inform you about the history of each of these distinctive and unique light houses that can only be seen from the water. Includes Cold Buffet and Breakfast. Cape May Whale Watcher Prime Rib Buffet Dinner Cruise – 6:30 PM An early evening Voyage Off Shore Aboard New Jersey’s largest and most comfortable Marine Mammal Boat, enjoy the Summer Cape Sunset fading into the horizon as you dine on Prime Rib and enjoy the air conditioned cabin wit spectacular ocean and beach views East Coast Jet Ski Rental – Cape May Get on the Water in Cape May NJ If you are looking for a cool and refreshing way to enjoy your summer vacation in Cape May, try renting a personal watercraft (PWC), also called a Jet Ski or Waverunner
Posted by Unknown at 9:55 AM 2 comments:

Email ThisBlogThis!Share to TwitterShare to FacebookShare to Pinterest
Labels: Cape May Drone Footage, Cape May View, Cape May View of Congress Hall

Posted by Unknown at 8:50 AM No comments:

The ferry is a great way to take a day trip either to just cross the bay and come back again without leaving the boat, or to take some time ashore and do the some of the great ideas shown below.  Please call ahead to confirm availability and dates of operation. Times and dates listed are best information received at the time of publication and are subject to change by the individual properties.

During the summer season, shuttles can help get you to some of the locations, but all are available by car. (Shuttles do not operate at other times of the year.)
Want a suggested itinerary? Call 1-800-643-3779 to discuss and book your trip with our Guest Services team. Or check out our Day Trip short video and our idea galleries below!
Click here to book reservations for the Cape May Spring Ferry
Bicycles Are Free!
Did you know Delaware is now rated #3 in the nation for bicycle friendliness with new trails nearby the Lewes Ferry Terminal?  NJ is not far behind, ranking #7 with trails to nature centers, Cold Spring Village and the beach!  See how you can rent bikes at each terminal during the summer, and find info on bike trails at cmlf.com/bicycles.

Email ThisBlogThis!Share to TwitterShare to FacebookShare to Pinterest
Labels: Cape May SPring 2017 Events
Cape May NJ Cape May, NJ 08204, USA

Find the Best Cape May Restaurants with Current Reviews

Come to Cape May and eat like a local, take a look at some of the top restaurants in Cape May New Jersey.

Cape May offers a wide range of restaurants from the traditional outdoor venue to the newer restaurants opening this Season. Simply click on the following links to get real time reviews and google maps to plan your next dining experience.

Are you coming to Cape May and would like to try a BYOB or Bring Your Own Bottle restaurant. One of our favorites is Union Park located on Beach Ave inside the Hotel Macomber. If you are looking to get away from the crowds try the Red Store located in Cape May Point.
Why not save half of your Cape May Restaurant bill and bring your Wine or beverage for dinner. You will not be charged a corkage fee and if they do not serve alcohol, and you can enjoy your favorite wine selection as you dine. Cape May offers a number of liquor stores nearby to pick up your favorite selections.

Union Park in Cape May Offers BYOB
Cape May BYOB Restaurant Listings
Where can I find a local Liquor Store or Tobacconist in Cape May or the Wildwood area During our Vacation?
Local Cape May County Liquor Stores

Posted by Unknown at 8:40 AM No comments:

Order discounted tickets for the 2016 season

Click above to order Cape May Whale Watcher gift certificates 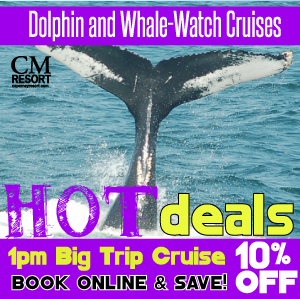 Book Tickets On-Line and Save 10% 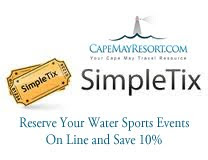 For Email Newsletters you can trust

Love Cape May - Visit our Cape May Site

Add this to Stumble Upon